Today I went for a little drive around Lancashire and collected some images of old and new signs, and several of them have caused me to get a bit grumpy due to elementary mistakes that either make a sign cluttered, or suffering from design errors. Instead of just griping, though, I intend to demonstrate how the same sign could have been designed as a constructive critique and a sort of workshop for sign designers who need a bit of inspiration.

The simple fact is that whilst Chapter 7 is great for telling you where to put blocks, etc, there is virtually nothing on how to assemble a sign in the first place. The best information available (and we presume will become part of Chapter 2 when it is eventually published) is currently two Interim Advice Notes that were helpfully drafted by Matthew Youell of Highways England. These two documents are great, and represent the first real leap forward in advance direction sign guidance since 1964.

So, here’s my ‘rogues’ gallery, and my own interpretation of it.

The A601(M) is a weird little road. It originally was the end of the Lancaster Bypass section of the M6 until it was extended north in 1970. It then gained a single carriageway extension to the south in 1987 or so, to connect to the nearby quarries. It isn’t a trunk road, so the signs are all maintained Lancashire County Council.

Note: the future of this motorway is in doubt, as there are development proposals that will see special road status removed from the entire route. That probably explains why the old signs have survived for so long.

The worst offender at junction 35A in terms of adherence to design rules has to be this assembly.

Due to the amount of sign clutter and risk of confusion that multiple signs on a roundabout’s circulatory carriageway can cause, it is not now considered best practice to provide multiple signs at a roundabout in this style. However, if it is deemed desirable I would suggest the following replacement sign.

Despite the presence of the non-passively safe lighting column, it is good practice to consider having crash friendly sign posts on the assumption that the column will eventually be replaced.

The same de-cluttering principles as the above sign have been applied. The sign gives only the relevant information at this point. The next junction is the decision point for M6 north or south. We have an unfortunate tendency to overload drivers with information before they need it and this causes more problems than it solves.

The advance direction sign for the A601(M)’s junction with the M6 is hidden by foliage, and is thus extremely hard to photograph. Throw in the March sun and all I have is a terrible quality photo. 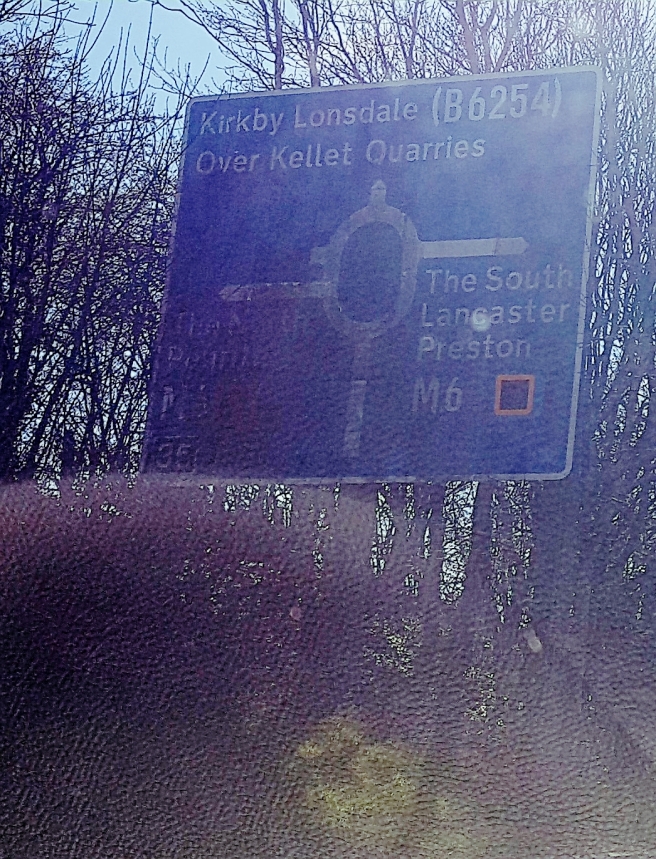 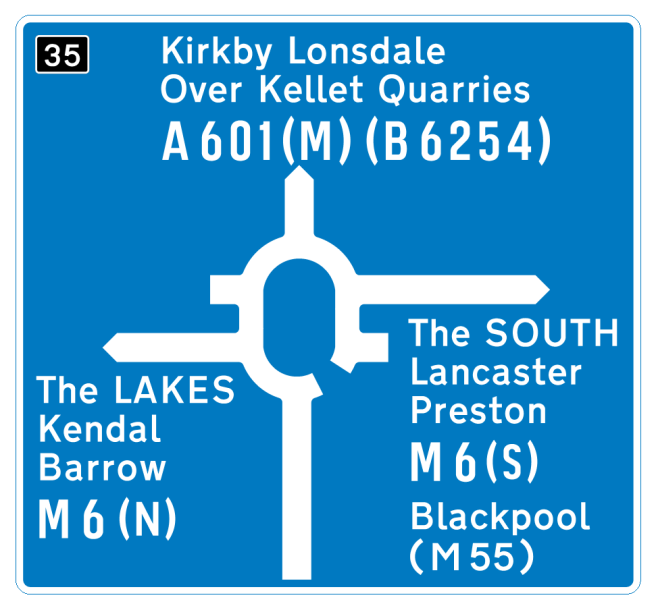 This entire assembly makes me grind my teeth together; the wrong lengths of Lattix post, the re-use of an old sign on a new passively safe structure, and the wrong use of block spacing on the left hand, newer, sign. I’d question the necessity of the right hand signs entirely, and the left hand one should look something like this:

Going around the roundabout we can see that this assembly is also in need of some serious improvement:

By bringing everything onto a single assembly, it reduces the overall space taken, and provides the same information on fewer signs:

Note; the services referred to are officially a truckstop, so the use of the lorry symbol, whilst strictly non-conventional, is at least of use to HGV drivers.

The only problem with this sign is it is old and has a badly aligned “Truckhaven” coverplate on it. 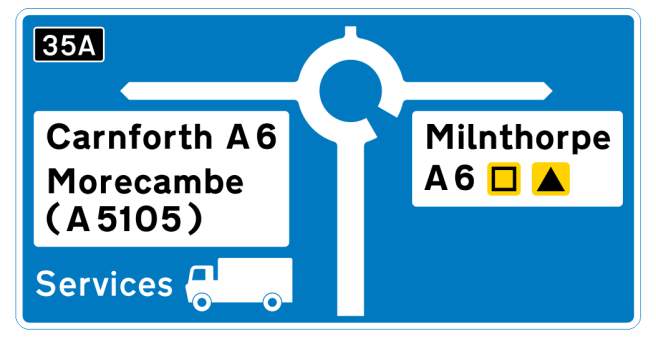 There are a few other bothersome signs in the near vicinity. These all have similar issues to those raised above such as missing route numbers, missing symbol cut outs, and poorly applied coverplates.

It does bother me slightly that on a motorway that is barely 1.5 miles long, that virtually every major sign assembly (that’s 13 of them) needs improvement in one way or another. Not a great example to follow.