Quite possibly the most well known motorway sign in the UK is the “M40 Bunny” sign. Why is it called this, you ask?

Well… look at it…

The less safe-for-work description is “the M40 Playboy Bunny sign”, but it doesn’t really look like that logo. Or so I am told. Picture credit: unknown

There doesn’t seem to be any logical explanation for this sign even existing. Many have suggested it is because of the “unusual nature” of turning left to turn right, but that happens at other motorway junctions too – for example the M1/M18 split, which is still where most people hunting the elusive “The NORTH” turn left to go straight ahead. No such signs exist there.

The Bunny can’t be a response to a road safety problem either as it opened with the M40. In any case, a simple lane drop is hardly unusual. There are others on the M40 itself (Handy Cross is a notorious example).

Some history is useful here: the M42 is, like most motorways, a total bodge job and not what was fully planned. What is now J3A was meant to be where the aborted Strensham-Solihull Motorway would have joined the party (binned off when the M5 was widened in the late 1980s, and has since been widened again as a smart motorway). Why J3A was chosen on a motorway with a new numbering sequence is a mystery, but the best conspiracy theory is someone noticed that the M42 met the M5 at J4A, and also met the M6 at J4A, and decided that J3A somehow fit that pattern. Honestly, don’t try and explain  decisions taken regarding motorways in the UK. You’ll drive yourself off a cliff edge of despair. More info is available at Pathetic Motorways.

Now the design errors are numerous too.

At this point that the sign is actually 2 miles from the diverge, not 1.5 as the sign erroneously states. However, there is a relatively short weaving length from the A3400 to the M42. Maybe the shorter distance keeps people left earlier but I doubt it.

There is also the American dotted lane symbol inside the map drawing. This is something I have always found hideously ugly and unhelpful for navigation. You have no hope of seeing it properly at motorway speeds and it just looks untidy. It adds nothing at this point either, as traffic still has plenty of time to decide on a lane.

The text isn’t aligned with the map properly either, which makes the sign harder to decipher at speed. If you have to slow down from lawful motorway speeds to read the sign then it is not doing its job properly. It’s therefore possible to argue that this sign should be removed and replaced with a conventional “M40/M42 Junction 2 miles” sign as per TSRGD.

The map itself insinuates an at-grade crossing of slip roads too, when in reality there is a flyover. Pedantic, yes, but it’s still misleading!

But the real crime is that this sign is now out of date. As part of the M42 smart motorway works, the original split has been modified to be a tiger-tail diverge, meaning two lanes now exit onto the M42 northbound. The Bunny is therefore telling drivers to merge into a lane they don’t particularly need to use as slower traffic in the left hand lane can be passed comfortably without missing the exit.

These works did not see the sign removed. Indeed, during construction someone made a replica of it! 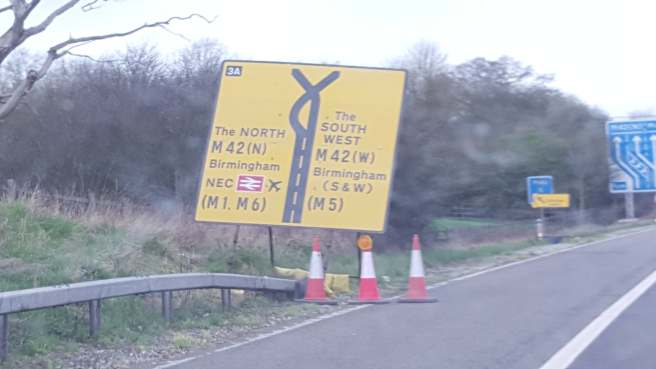 No. Just, no. Picture credit: unknown

It’s time this wee little bunny was taken out of the field and shot, frankly. Change my mind.

Edit: in response to comments below, if it had to be kept then it needs some work…

A revised version, using the OS symbol for a bridge (not prescribed, so that’s a DfT authorisation straight away), plus the variable element for M6 – which is probably superfluous these days – positioned more logically. I still do not like this sign.