Last month I was invited to provide a presentation to the IHE Traffic Signs Panel once more, and this year I focused on a problem that causes numerous difficulties for both managers of highway networks and the railway system alike.

There are an estimated 1,800 bridge strikes a year on the network which on average is a staggering five a day; and the cost of each one is at least £13,000 provided that the structures in question don’t require massive attention for repairs. Considering a correct system of signs can cost as little as £1,000 the return on investment is high so there truly is no excuse for the poor signing examples that litter the network nationally.

That said, welcome to the tedious world of height restriction signing. First off, let’s run through the basics:

What is a low bridge/structure?

There is no requirement to sign structures that exceed this minimum height but some abnormal load routes do so anyway as a navigational aid. It is possible to see signs with heights over 17 feet indicated as a result.

Who is responsible for height restriction signs?

The Highway Authority is responsible for provision of signing as per Section 122 of the Road Traffic Regulation Act 1984. However, the bridge or structure owner must make allowances for this (e.g. power supply for illumination where needed) and ensure that maintenance is unimpeded.

The Highway Authority has several ways to tackle height restrictions, from advisory warning signs to mandatory restrictions backed up by Section 36 of the Road Traffic Act. Originally in 1964 (let’s ignore the pre-Worboys era for now), the only option was to use warning signs – it surprisingly took until 1975 before Traffic Regulation Orders could be applied without Secretary of State approval for low bridges. In 1994, the requirement for TROs was dropped and a rapid conversion policy from warning to regulatory signs was recommended so that the police could take advantage of the new Section 36 powers.

1964 and 1975 extracts from TSRGD – note that it was not until 1981 that a separate metric units roundel was permitted, albeit with site specific approval.

How should these restrictions be signed?

I won’t repeat the guidance in Chapters 3 and 4, but I will direct you to the relevant page on the DfT website; it’s very useful (even for a lay person who may be querying poor signage!):

That said, the obvious answer is as clearly as possible, but this seems to cause some difficulties for less capable sign designers. A simple checklist is provided below that I will expand on in more detail further along;

Arch bridges are a unique case as the height restriction varies dependent on where the vehicle is – but simply put you need to use the specific sign for arch bridges on approaches and standard triangles on the structure itself. Regulatory signs are not permitted. Any other structure, with the exception of trees, should use regulatory signs.

Assessing routes is a relatively simple task but not one that is frequently undertaken. In my local authority days I was tasked twice with sorting out freight routes, one in hilly Calderdale which is notorious for being full of unsuitable quasi-mountain roads and the only major roads often are obstructed by low bridges. The aim here was to ensure HGVs stayed on the nearby M62 until it was no longer practical; especially given the main routes into Brighouse were hemmed in by low bridges. This resulted in a huge replacement of advance direction signs to discourage blind Sat-Nav compliance, which really should be the bane of any network manager. The second was in Blackburn, which again has two railway lines pass through the town but virtually every structure on these lines is substandard in height meaning of the numerous radial routes into the town, only two or three are actually suitable. The recent completion of the A678 and inner ring roads should enable a much better routing of traffic avoiding the A666 which has three of the borough’s most hit structures on it. At the time I was asked to write a report these rotues were still ‘may happens’, so unfortunately most of the work I put into a large report was rendered somewhat obsolete rather quickly.

The best way to create a workable strategy is to get a 1:50,000 scale map of the area you’re interested in, mark the low bridges on it, and then produce a series of lines to avoid it. This then will clearly show you where you need signing improvements as well. Once this is done the task of improving signs at the bridge itself becomes less desperate and you can avoid the need for costly detection systems and turning facilities because you’ve correctly managed the network.

Please avoid the current fashion for decorating bridges with giant signs that do not actually give relevant information. 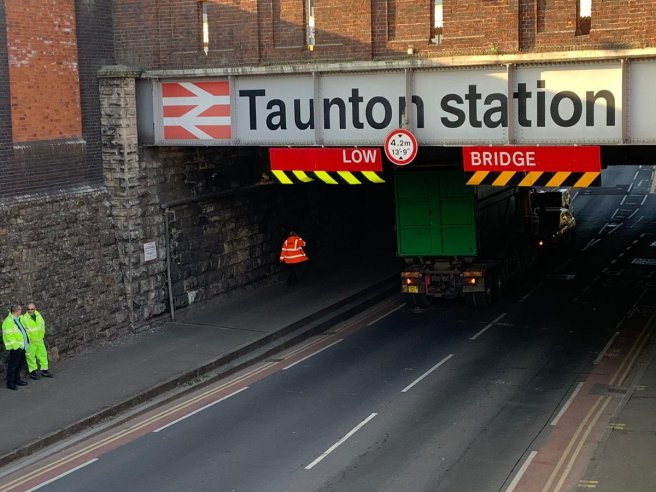 Despite the low bridge text, this bridge still got hit. Probably because the relevant information – the height limit – was drowned by the needless decorations surrounding it. 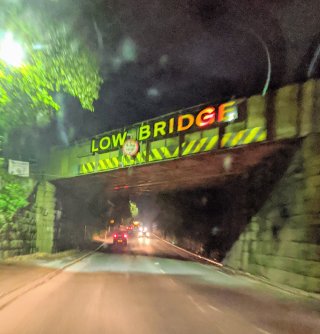 This one, on the A666 in Blackburn, is particularly infuriating. The legally relevant information is once again obscured by a needless panel that was needlessly enlarged the same night I was presenting to the IHE about the pointlessness of it all.

The importance of sign cleaning, good illumination, and positioning cannot be overstated. Maintenance is costly so doing things right in the first place should save money – for example making sure tree canopies don’t obscure the signs or cause moss growth, lighting units should ideally be easy to access and not reliant on cables being strung along the bridge structure – if solar units are possible then seriously consider them.

Getting these things right first time is often the key to ensuring no problems further down the line, as rectifying errors is costly especially if the result is a damaged bridge as a result of someone hitting it! As ever if in doubt there are always professionals that can provide advice – the IHE forum on Traffic Signs & Traffic Management is a good place for a formal discussion. Alternatively some of us can be found on Twitter and elsewhere!

5 thoughts on “Height Restrictions and the Correct Approach”