On 5 December, the Preston Bypass passed its 60th year in service. It started off as a humble eight-mile length of road that many would barely recognise from today, with intermittent ‘soft’ shoulders and only two lanes in each direction. A wide grassy central reservation allowed for future expansion and there was only one interchange midway along, with the A59. At both ends the motorway connected to the A6 at large roundabouts designed for future extensions of the road, eventually realised as the M6 to the south and M55 to the west (where M6 J32 now stands was a temporary bend).

However, there was one serious issue. The new road was expected to attract fast traffic, for which the existing series of traffic signs were not deemed to be satisfactory. A new way of thinking had to be developed to cater for this new way of travelling, and fast!

The 1957 TSRGD and its predecessor, the 1944 Committee on Traffic Signs, had a sign that applied for grade-separated junctions, but it was still stymied by inefficient use of the sign face and upper-case text surrounded by boxes. With the opening of the motorway occurring less than a year after the 1957 TSRGD was in force, this meant there was no time to produce a series of new signs under the existing regulatory frameworks and temporary signs had to be drafted in.

Due to this, the motorway at Preston duly received an experimental set of signs that partly inspired later designs and partly was never seen again. The long, and curious, history of the motorway sign had begun.

The Preston Bypass established some design considerations that remain with us to this day – firstly signs on the motorway itself should be blue and use a combination of the newly created Transport and Motorway typefaces. Secondly, the determination of x-heights via lower-case letters rather than the previous all upper-case was introduced and the typical motorway x-height was set at 12 inches, which today is translated as 300 millimetres. This gave the signs a massive increase in legibility at speed. Simplicity was deemed to be key.

One thing that was unique to the Preston Bypass was the motorway symbol chosen by the then Ministry of Transport. For reasons known only to them, they had taken an immediate and forceful dislike to the European conventional motorway symbol. 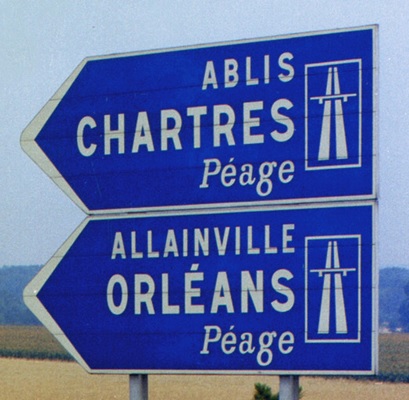 The ‘elongated’ motorway symbol that the Ministry of Transport disliked. The French themselves replaced it in favour of a more British style design in 1982. Picture credit: Forum SARA.

The Ministry therefore eschewed continental practice (this seems to be a recurring theme with the UK), and developed the following abstract symbol that no-one in sign design circles has been able to explain:

The abstract motorway symbol used only at Preston. This sign was situated on the slip roads from the A59 (now J31). Picture credit: Claude Ball, Flickr.

An interesting point regarding the design of the early signs is that they used coloured panels for the approach signs.  The Anderson Committee notably abandoned this principle; but it was re-instated as part of the 1964 TSRGD. Sometimes you have to go in circles to go forwards in British sign policy making…

The former end of the A49 at Bamber Bridge, and this sign suggests the M6 starts immediately to the right if you apply today’s panel and symbol rules. The reality is there was a short length of A6 to use before joining the M6. This area has now been radically altered by the Bamber Bridge Bypass. Picture credit: Claude Ball, Flickr

Striped poles were at least still being used – this remained a TSRGD requirement until 1964. Of course, on a motorway itself that didn’t apply. Indeed, no sign supports had been considered in detail by December 1958 and it appears that a series of desperately assembled scaffolding arrangements were used before the Anderson Committee settled on the use of concrete sign supports. 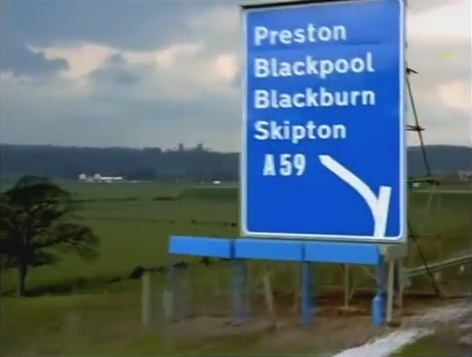 The temporary scaffolding supports, with a more permanent lighting installation painted in a very pleasing shade of blue. This rare colour imagery is taken from the Look at Life series. Note the lack of forward destinations – we shall return to that in a moment.

The new 12-inch x-height as mentioned earlier meant the signs on the bypass would be visible for up to half a mile away. And they were. Thanks to the wonders of the internet, photographs of most of the signs in use on the bypass now exist so we can discuss these in a bit more detail than we could ten years ago when I first wrote on this subject (alas such writing is lost to the mists of time). Much more archive material has surfaced since then.

The 1 mile advance sign was simple, but had various differences from the current sign style. Firstly the ahead arm was a stub, no point provided. Secondly, the legend is shown as “1 mile” instead of “1m”. I’m not going to discuss the issues that causes given “m” is the SI unit for “metre”. Junction numbers of course did not arrive until the late 1960s. The main thing to notice is the angle of the fork – this gave rise to the affectionate nickname of “wonky signs”, because apparently this design gave the impression of a 3D look. Naturally it didn’t last as it was both space-consuming and, ultimately pointless given existing map type signs didn’t do it.

Unusually, this sign provided the ahead destinations instead of the final advance direction sign. This copied German practice which still applies to this day.  The pronounced ‘wonkiness’ is most evident on these signs. Another interesting design is how the fraction is shown, with a horizontal vinculum rather than the 1957 diagonal. The Anderson Committee reverted to the diagonal when reporting.

The diverge sign differed from contemporary practice by again emulating German styles, in that there were no chevrons or arrows within the sign and the shape of it itself was deemed sufficient. The Anderson Committee favoured just using the route number with a hooked arrow, rather than a flag type sign. This practice was not always followed, however, in Lancashire at least, where flag type signs with the Anderson triangles were used.

Oddly, the decision was taken to use white backgrounds at the terminal points, along with the off-slips at the Tickled Trout interchange. Again, the Anderson Committee scrapped this in favour of all blue signs – coloured panels would not be used until 1994. 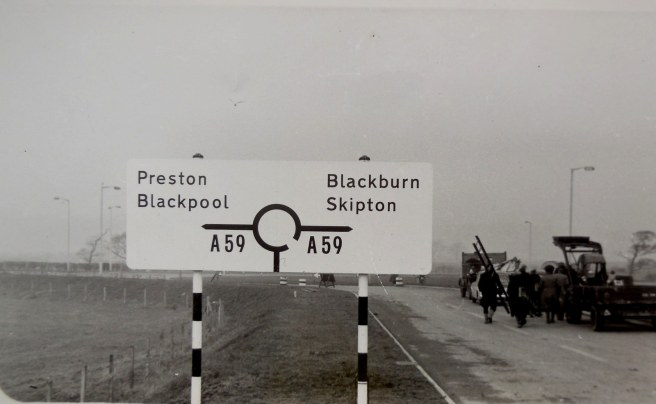 The signs on the mainline appeared to use experimental reflective areas. Also note the total absence of a border for the slip road direction signs. Picture credit: Claude Ball, Flickr.

The Preston Bypass used weird triangular countdown markers, which were explained helpfully by The Times before the motorway opened (see below).

Another oddity was the fact the Transport typeface had a flat-top 3, which was not reproduced in the Anderson Committee reports. In fact, if you look closely the image below, you can make out that the slope on the letter ‘t’ is much more pronounced as well, with other features like the tail of the letter ‘a’ being a little more flourished too. It’s evident this was most likely a hand-drawn experimental version of the typeface as it only had a single weight (what we’d now call ‘medium’, even on white backgrounds). The route number was not used on confirmation signs, instead this was a separate sign on the central reservation. 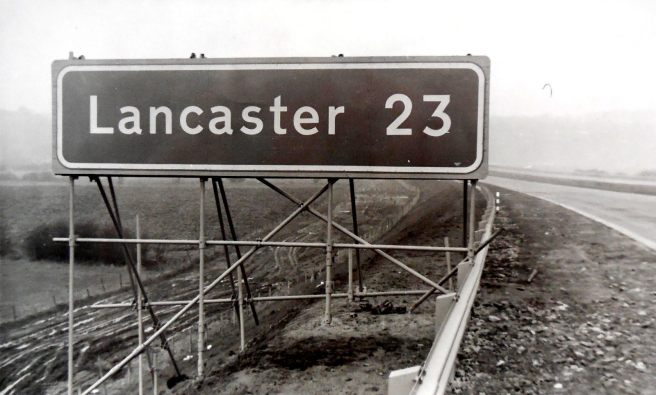 And finally, the end of motorway ahead signs themselves were interesting. These were a giant red disc, again with 12-inch x-heights. These were replaced by rectangular blue signs in the final Anderson Report.

Other than the photographic evidence we have, not much is archived from the early Preston experiments, as most material focuses on the actual road itself – thus proving once again that in highways engineering, traffic signs are the poor relation.

For a detailed history on the wider issues faced by the construction of the Preston Bypass, head on over to Chris Marshall’s brilliant website.

Stay tuned for the next part, covering the evolution of motorway signs up to 1964…

11 thoughts on “The Evolution of Motorway Signs – Part One”