Note: some of the images in this article are taken from Motorway Services Online. This post is also a little tongue in cheek and a bit of a rant. You’ve been warned!

One of the things that always causes me to chuckle, or in some cases want to rip my hair out, when out and about is seeing how private landowners deal with the thorny issue of directing their visitors around the site.

Several do a fairly decent job, they pay out for proper signs from a proper sign manufacturer. These guys know that even on private land you can still apply the Road Traffic Act (some information here) and therefore they treat it as a proper part of the road network. This is sensible, as the safety critical issues such as one way routes and give way or stop signs need to be clear and enforceable if someone drives in such a manner as to cause an accident.

Others get the correct sign, but make it in a home made fashion. This is OK, but it is surely preferable to buy a proper sign to begin with.

Some of the home made efforts of two of the big four supermarkets. You can still get the meaning here, so it’s not really worth losing sleep over. It doesn’t look as tidy as it should though.

A particularly unusual example I found recently in another supermarket was the use of a Stop sign, but it was mounted on a corporate ‘lollipop’, meaning its distinctive shape was lost. 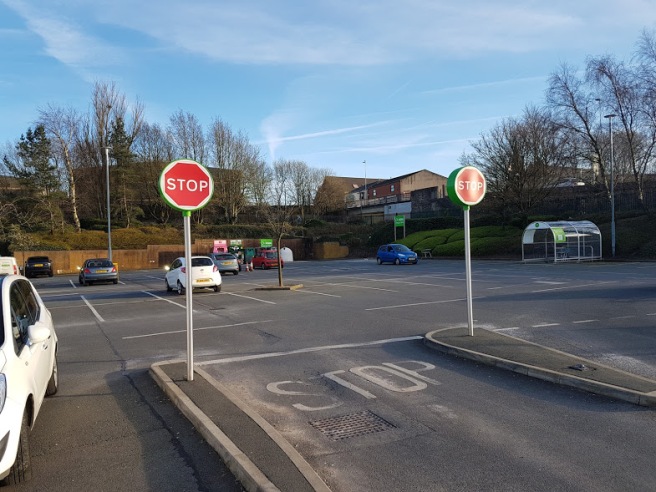 The unusual use of a Stop sign combined with traffic islands to marshal traffic leaving this supermarket.

Away from the supermarkets, some fast food outlets have invented their own signs. They are unusual in using proper symbols, but scaled down. 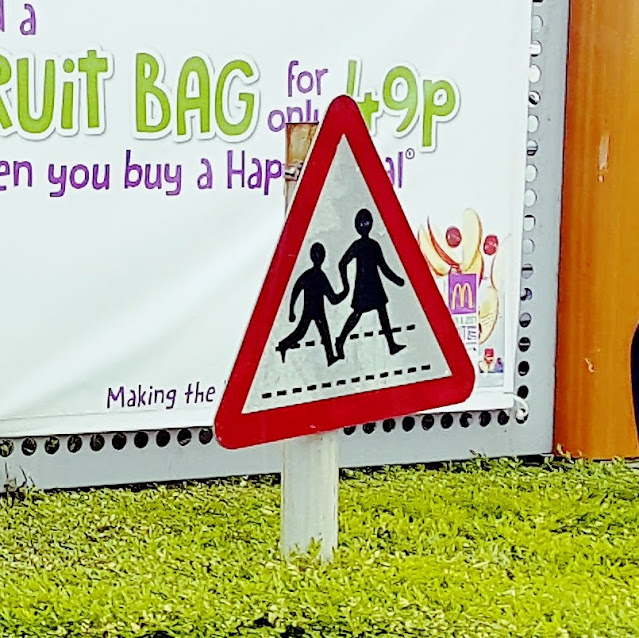 Children using a zebra crossing ahead? It’s actually clever as there is actually a ‘zebra’ crossing of sorts, and children do use it. 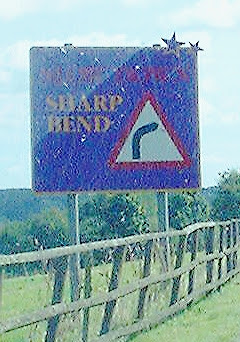 Not all homemade creations are clever, however. This ‘beauty’ is such an example, unfortunately it’s not a brilliant photograph. They clearly misunderstood that Halt and Give Way are two distinct instructions, and in any case, did the person that came up with this time travel from 1955? 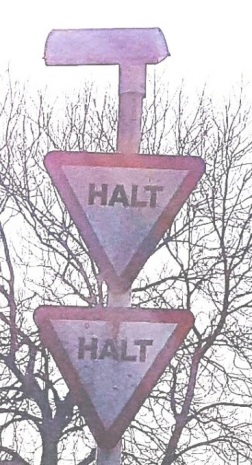 So good, they tell you twice. At least it’s illuminated.

A rare example is where you have a private road network in a housing estate; this one opted for a rising bollard installation to prevent rat-running through the area. The signs are not remotely what you’d expect to see on a road.

There are approved signs for this situation, but why use them when you can make your own?

Until recently the absolute worst offenders were motorway service areas. Chris Marshall of CBRD fame used to have a scathing article on this subject, but it has vanished into the mists of time.

The use of corporate branding means that signs become secondary to the brand, and therefore things that should not happen do. The DfT have slowly started to crack down on this and some of the homemade horrors of the past are on their way out. 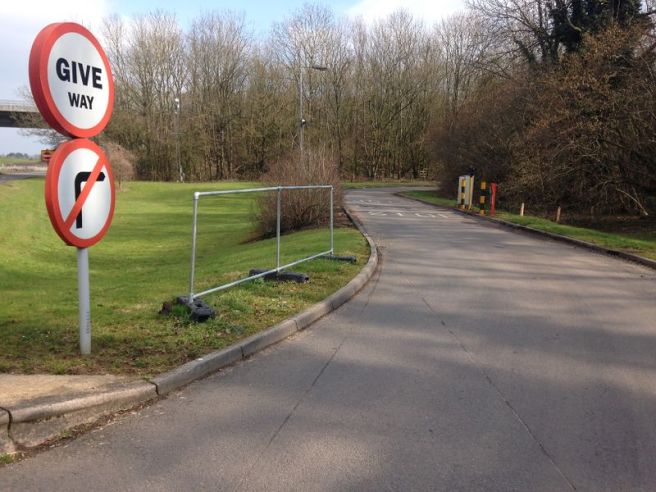 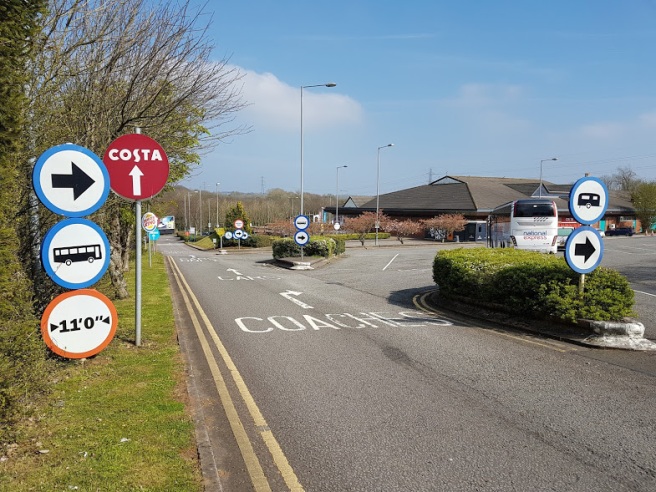 Blue and red circles have distinct meanings; mixing these up in order to promote a corporate identity is a terrible idea. “You MUST NOT Give Way” is the unintended message here. That said, Moto love circles. 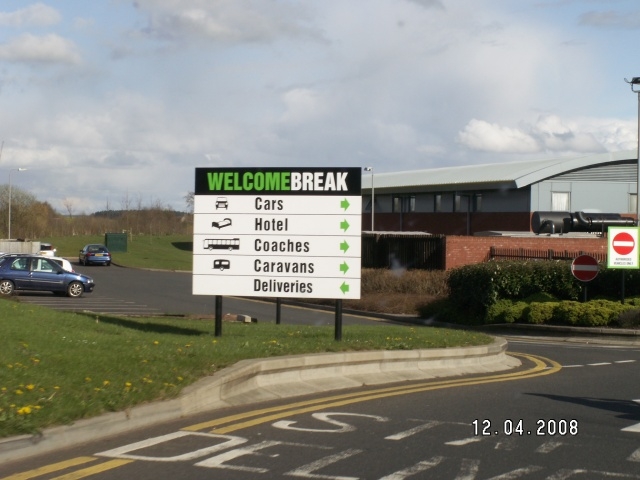 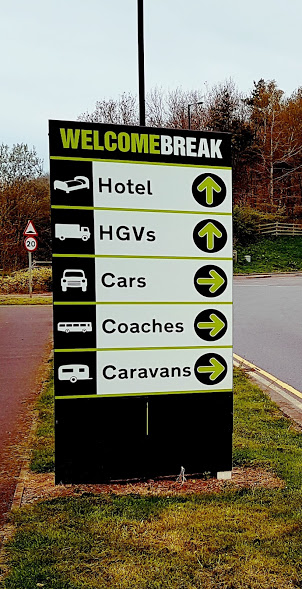 Before and after, some deference towards the TSRGD at last! I rather like the totems used in the second image. 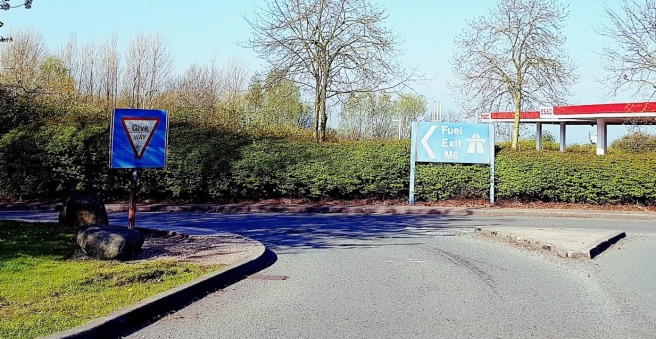 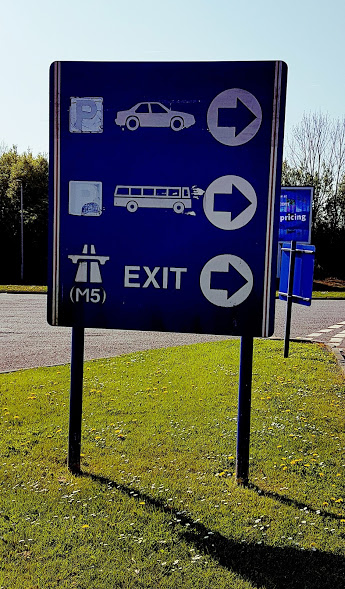 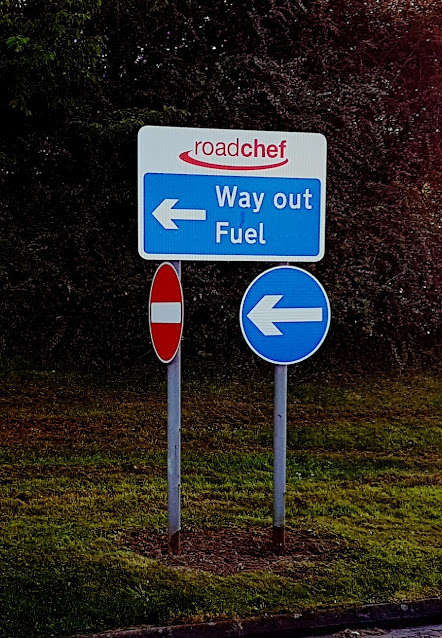 Some more deference towards TSRGD, although some earlier efforts are utterly atrocious and need putting to bed.

Special mention has to be given to this: 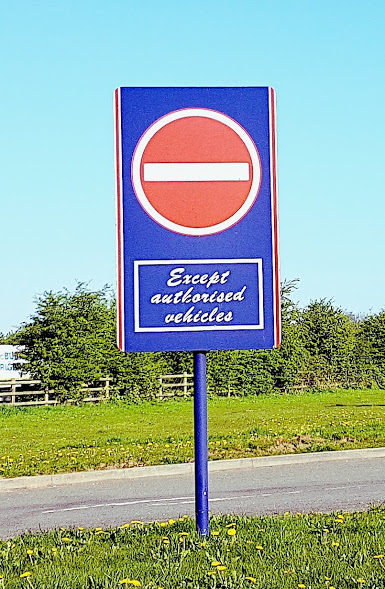 There are no words, I am afraid. Who on earth decided that was an appropriate typeface for reading from a moving vehicle? 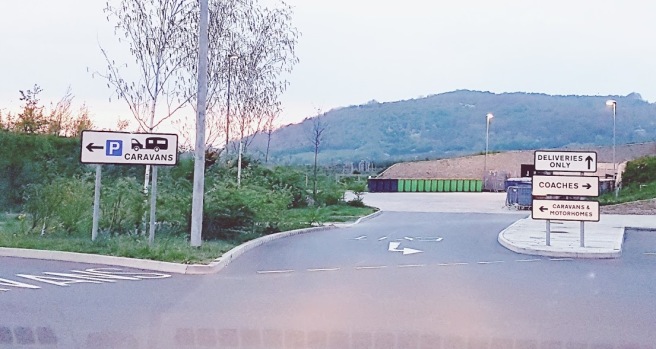 These are almost spot on, apart from the SHOUTING.

There are of course glitches where an existing sign is fixed rather poorly, but this is the problem with private landowners, they often aren’t really aware or interested in the best ways to deal with signs. 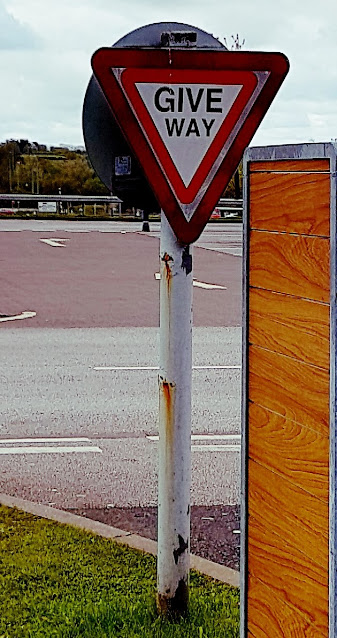 Not quite a winning result here but it still works, kind of.

Unfortunately really silly mistakes do happen; and I am not sure how they do when they are like this multi-storey car park’s example. 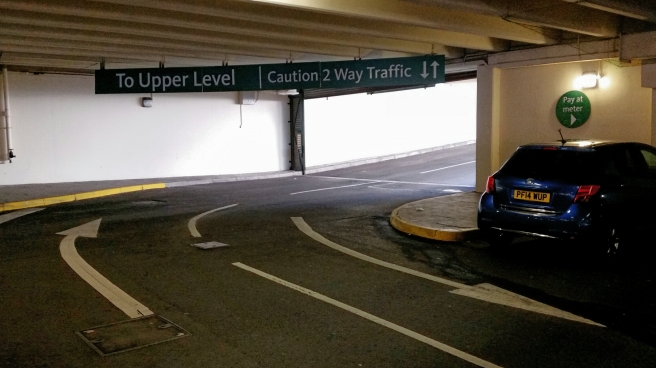 A refresher course in how we drive in the UK may be in order here.

Sometimes if you don’t have the correct sign, just use another one and hope for the best. 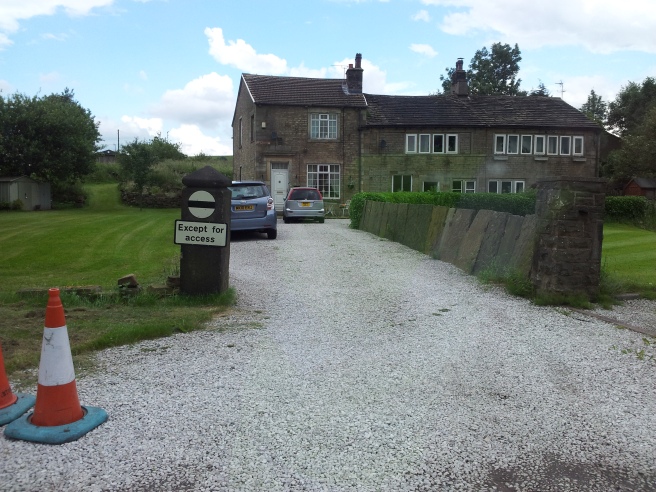 Yes that is a converted Dia. 671 pretending to be a No Entry sign. Given the lack of parking near the lake where this house is they obviously have had trouble with people parking on their driveway.

So, what would be better? Frankly, the simple answer is to just use the prescribed signs from the TRSGD! If you must do (direction) signs in a style of your own choosing, at least use the correct symbols and typefaces. It isn’t difficult, this is a simple design I’ve just knocked up in five minutes as a hypothetical service area example: 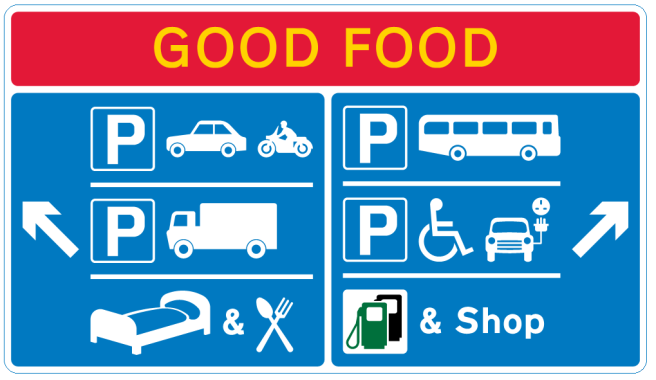 Therein lies the problem though. There’s nothing to force private landowners to comply with the TSRGD. Unless the landowner specifically states that for the purposes of traffic enforcement that the Highways Act and Road Traffic Acts apply to the roads within their estate then the police can’t really enforce the rules, and if anything any poor driving becomes a matter of civil trespass in this case. This is why large factories and such like often warn their staff of dire consequences (such as being sacked) for breaking the ‘rules’ of their roads.

Whilst poking fun at these obscure and often weird designs can be fun, someone has decided that, for better or worse, this is what they want on their land and will probably continue to make it up as they go along for that very reason. I suppose if nothing else, it gives sign designers like myself something to talk about and possibly gnash and grind our teeth about too.